During my freshman year I took the honors introductory physics sequence. This was the only normal thing about my physics degree track. It was taught well, skipped optics (except in the labs) but covered topics in special relativity, quantum mechanics, and thermodynamics.

In my sophomore year I took one quarter of UW's mathematical physics class and learned nothing. (We covered matrices, complex numbers, and some other stuff. We also had to learn to use Mathematica. It has been over two years since I first used Mathematica and over a year since I left Mathematica for SAGE.) Disappointed, I decided that Winter to self-study quantum mechanics and took a graduate thermodynamics couse. That failed, and I forced myself to finish the mathematical physics sequence.

I took junior year quantum mechanics next, skipping sophomore year quantum mechanics. (I hoped to get away with taking it, but in the end gave up.) That class did not have a fixed deadline for submitting work, and I was preparing to go to Budapest, so I put it off until I was almost done with the degree. Once I returned to it, however, I was serious and wrote a 71-page mini-thesis on quantum mechanics. I didn't proof-read it well, and I know there are errors, but here it is anyway.

The first laboratory I did in physics was at the senior-level. This was the last quarter when neither the circuits laboratory, nor the sophomore-level quantum mechanics course were required. Good thing for me, since I had neither. This was the lab where I learned to use an oscilloscope. It was probably my most interesting laboratory course — we studied the Zeeman effect, the Hydrogen Lamb shift, used Fabry-Perot interferometers and lock-in amplifiers. We used manual chart recorders instead of digital probes — I then employed a graphics editor (GIMP) to obtain precise x and y values of points on scans of graphs, entering them into a text data file, importing it into software (SAGE) and programming data analysis. 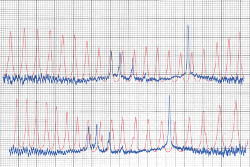 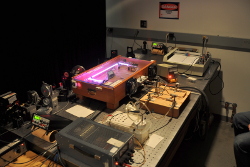 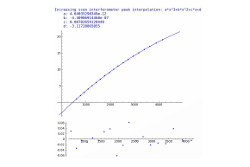 Left: Lamb shift chart output by manual recorder, scanned. Middle: experimental set-up, chart recorder on the far end. Right: interpolation curve derived from the top half of the chart after peaks are digitized.

By the time I finally got to the required circuits laboratory, I was very proficient with using the oscilloscope and debugging circuits. I actually enjoyed the lab (most people don't due to its heavy time pressure), because I had the opportunity to build circuits.

In my last year at UW I took the three seminars. Each quarter I was required to do a presentation (10-15 minutes, depending on the quarter). In fall and spring I also wrote a paper. As the seminars progressed I got used to them, and in the Spring I picked a topic interesting enough to write a good semi-research paper.

Figuring out how weak measurement works in practice took a lot of nerves. In my slides I make a conceptual error. In writing up the paper I tried to connect that weak measurement equation to probabilistic estimates based on quantum mechanics. I was never able to do so in general. However, I went through pages of paper doing calculations that went nowhere. Finally, on the last day I figured out what my mistake was, and my simulations matched realistic expectations. I simply wrote up my results and turned them in.

At the end of the quarter, our physics club went on a trip to the Linear Gravitational Observatory in Eastern Washington. I joined. Before, the only exposure I had to large collaboration experiments was when a senior physics undergraduate student led a research seminar. He told us how the UW KATRIN set-up worked and his role in the team. We also got hands-on experience depressurizing superconducting magnets, working with circuits, and I got to handle a radioactive rod during one of the calibration runs. (This was my miniscule, but nonzero contribution to KATRIN.) 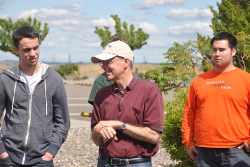 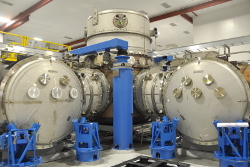 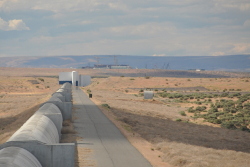 Left: our wonderful guide talks to the group. Middle: inside LIGO. Right: the end of a long arm of a huge Fabry-Perot interferometer that LIGO is.

LIGO was an experience like no other. Our guide shared many details about the experiment, we got to walk around the control room and stare at the screens as we pleased, and then we saw the very middle of the main building. I listened to our guide as best I could and asked way more questions than is typical for me. (Most things I figured out later on my own.) Now that I am a better bicyclist and am able to commute longer distances, I can consider working there.