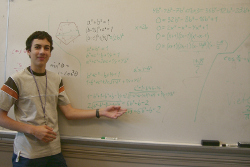 My solution of the regular pentagon in SIMUW 2006.

In the fall of 2007 I started college. At the University of Washington (UW) there are two years of accelerated calculus sequence. The first covers calculus, differential equations, and linear algebra; the second covers topology, multivariate calculus, and complex analysis. At the end of the second year everyone wrote a paper on a topic of their choice. By this time I've come to be fascinated with the Sato-Tate conjecture, so I wrote about it in my term paper.

In my third year I studied abroad in Budapest. It was a great experience to do nothing academic other than math. (The only exception was a Hungarian language class.) There was a little lounge in the college building where our classes were held, and often we occupied the lounge and discussed mathematics. One of the senior students lectured us in category theory and abstract algebra. We also went on a lot of weekend trips. 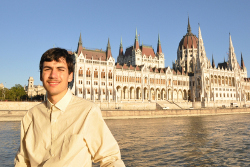 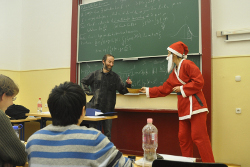 Quickly the four-month adventure was over, and I was back at UW, where I took number theory in Winter and a graduate course in the Spring. Budapest was my bridge to graduate math. After I came back, I took mostly graduate math courses.

In my fourth year I took graduate algebra. We covered modules over PIDs, modules in exact sequences (injective, projective, etc.), some cohomology, some representation theory, Galois theory, and ended with Noetherian rings and local rings. In my fifth year I took graduate real analysis, where we covered Lebesgue measure theory, both concrete and in terms of abstract measures, topology, Hilbert and Banach Spaces, dual spaces, and Fourier analysis.

My genuine interest, though, was in preparing for research as quickly as possible. I sat in or took relevant graduate courses in algebraic number theory. In my sixth year at UW I was finally ready for more advanced math. I took algebraic number theory in the fall and elliptic curves in winter and spring. For my fall quarter class I had to write another course paper. Long before I started exploring a problem related to elliptic curves, so I wrote about it.

However, I felt like this project was too computational, and I always wanted to do something more theoretical. I am currently exploring other topics, also related to the Sato-Tate conjecture.

I enjoy competing, so I took advantage of the undergraduate student math competitions. I took the Putnam Competition the maximum number of four times, once in Budapest. This is a 6-hour competition with 12 problems. The annual median score ranges in 0-2 out of 120 maximum points.

The UW Putnam contestants and coaches from 2008. I am in the top row on the left. (Photo by Kathy Sauber.)

The Mathematical Contest in Modeling (MCM) is another competition. As part of it, students spend 72 hours building a model and writing up a solution to a real-life problem. I participated twice.