In the end of my second year at the University of Washington (UW) I realized that I could pursue a minor in linguistics and thus satisfy all the UW general education requirements. Little did I know how much I would come to enjoy the field and fit in with the people in it. My best friends, the upperclassmen who I look up to for advice, most are in linguistics, and the best relationships I've had with professors have been linguists.

The introductory linguistics class, which I took in the spring of my second year at UW felt like high school all over again - but the classes that followed: mainly syntax and phonology, were more challenging. Below I list a few papers I wrote for those classes.

At the same time, I became more and more interested in Chinese. I took summer intensive first-year Chinese in 2010, learned simplified characters, then took the graduate-level Chinese grammar course the following fall. The grammar course is taught in traditional characters and is usually taken by graduate students who wish to teach Chinese. My classmates were two Chinese graduate students and a Chinese professor. It was difficult, but I enjoyed it a lot.

I took second-year Chinese in 2011-2012, being often the only student in my class studying traditional characters. Here is my writing sample from the second quarter final, with corrections.

Unfortunately, time did not permit me to take third year, but I made up for it. In the summer of 2012 I went on my first trip to China. It was a month-long adventure exploring Beijing, Chengdu, and the 沪苏浙 (Shanghai, Jiangsu, Zhejiang) region. I took thousands of pictures and posted over 400 on my China blog (no longer accessible on-line). 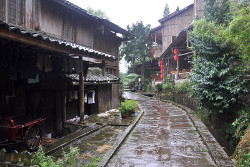 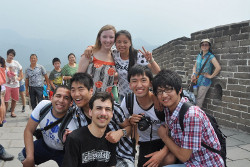 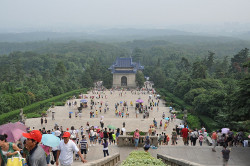 It was an amazing experience. We especially enjoyed going out of the way to places that rarely see foreign tourists. One day a group of us went on a day trip to Shangli old town (left), a small tourist village about 30 minutes from Ya'an, which is two hours from Chengdu. Thus it took us 2.5 hours to get there and 2.5 hours to get back, and we were left with about 50 minutes in Shangli. We all thought it was worth it, though.

This is what I especially like about linguistics: we live at a time when thousands of languages are about to go extinct, and we race the clock to gather data on those languages to aid in possible future language restoration projects. This requires traveling to remote areas of the world, which China is full of. And, at least in the cities, people were welcoming. An old man sits in his shop in Hangzhou, cooling his feet in a bucket of water. I ask him about the other kind of water (the one in a bottle). I buy a bottle, and he compliments me on my "Mandarin" - not Chinese, for he is a Wu speaker.

Finally, it is time to specialize and put the two together. In my sixth year I took a Chinese linguistics course, at the graduate level. My final paper was on old Chinese tonogenesis.

In the paper I state would like to study the subject further. My professor, however, had this to say in response:

You are certainly correct, as you note in your conclusion, that there is much more to investigate that is related to this topic; but you have already been exposed to the major ideas and evidentiary sources: evidence for tonogenetic processes in various languages; evidence for the specifics of Vietnamese tonogenesis; relationship between MC [Middle Chinese] tones and Vietnamese tones; evidence for derivational affixes in OC [Old Chinese] based on morphological pairs; evidence for ending consonants from transcriptional and borrowing evidence, as well as contemporary impressionistic descriptions of Chinese tones; and so on.

If I continue my linguistics studies, there will certainly be "much more to investigate".