Over the course of my high school and college years, I have been involved in a number of extracurricular activities. Here I list the most significant ones, in reverse chronological order.

You may be familiar with the game Capture the Flag. It has many variants, but at the University of Washington there is a Capture the Flag club that meets weekly. I joined the club in 2010, after returning from Budapest. It was fun, and the next fall I became an officer.

A year later my job shifted from helping oversee games to being one of two administrative liaisons. As it turns out, there was a prior incident with the club, and the UW administration needed to review our activities. To address this, I drafted a 10-page document that I presented to our club advisor. Eventually, the review was complete, and our club returned to normal operation. 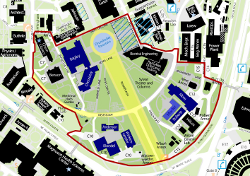 An illustration from the document detailing one of our locations.

Unfortunately, our membership declined in the process, and the decline continued through the spring of 2012. Games were still called every week, since the executive board didn't act, and my job became to run games, but my actual job for much of that spring was to arrive at the meeting place at 9:30 PM with game supplies, wait until 10:00 PM, post a message canceling the game, and go home. I did this diligently.

In the fall I inherited the club without players as club president. I knew what I must do and how to do it. The biggest challenge was to compose a team of five officers to register the club. With so few returning members, I wasn't sure who would volunteer, but a preliminary team was nevertheless put together. Our next task was to recruit membership, and that was accomplished by winter. Since January, we've been meeting for games weekly, as before. Finally, we needed to recruit new players for leadership positions, and here we have also been successful.

More work remains. Our membership is still low, and we will need to update the constitution next year. These are the responsibilities of next year's Capture the Flag president, though I intent to assist as much as necessary.

In 2009 a group of UW Robinson Center students decided to hold a game of assassins. I got involved with the creation of a web site and the composition of a rule set. The web site was fully completed by the time the game was played again in 2010. Those interested may browse the assassins web site

Before I entered the University of Washington (UW), I was active in my high school math club. We went to a number of competitions during the school year, the most important of which was the Northwest Math Championship in Blaine, WA. Unfortunately, we never placed as a team.

I went to UW through the UW Academy for Young Scholars program, so I was still eligible to compete in high school math competitions for two more years. We also had some teacher changes at the high school - our math coach transfered to another school, and another math teacher I knew took over the math club. I invited myself to help with coaching.

I implemented several changes in the way the club is structured. First, I used past contest performance, rather than "seniority" (the assumption that people new to the club are not as capable as long-time members), to determine the top team. Second, I knew exactly why we weren't winning in Blaine: we did poorly on team tests - so I concentrated our practice times on team tests. Third, I made sure to teach the club members as many tricks as time allowed.

The result: in 2009 the 1st Lake Washington High School team tied for 1st place in Blaine.